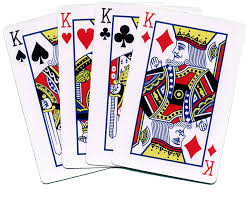 You might find it hard to believe, but poker hasn’t always been my first love. In my younger days, I was a keen chess player.

When I was sixteen my friend Dan and I stayed in Manchester for a week, whilst we played in the British junior championships. Our accommodation was terrible. The only thing we could afford was a youth hostel where we shared a room with twenty others, bread and cheese was served for dinner, and lights were turned out at ten pm. After a first dismal evening in, and a pair of opening round defeats, neither of us could face another evening at the hostel. Fortunately, one good thing was to come out of my first round defeat. As we left the sports centre where the chess had been played, we bumped into my opponent Kirk coming the other way.

‘Evening,’ said Kirk. ‘What are you up to tonight?’

‘Fancy a game of poker? My parents are away for a fortnight. My brother and I are trying to get a game together. If you join in, we’re up to six. Enough for a decent session. We only play for small stakes.’

I looked at Don. ‘Have you ever played poker?’

‘The same.’ I turned back to Kirk. ‘Count us in. As long as you don’t mind explaining the rules.’

‘My pleasure,’ said Kirk, handing us a scrap of paper. ‘We play five card draw poker. It’s easy to pick up. Here’s the address. It’s only ten minutes’ walk down the road. Eight o’clock start.’

Call it beginners’ luck, but that first night, Don and I, neither of whom had begun the evening with any idea about poker, both held our own. We played only for matchsticks, but I went home two boxes to the good, and Don made an even more spectacular gain of three boxes.

Over the next week, we played poker with Kirk and his brother several more times. It was a distraction from the chess, which unfortunately didn’t go well. After ten games of chess, Don and I were both placed around the half way mark of the tournament, well below our expectations.

To mark our last night in town, Kirk had a proposal. ‘Chaps, you’ve both got really good at poker. I can’t believe how quickly you’ve picked the game up. To celebrate our new friendship, do you fancy playing for real cash?’

Don looked inside his wallet. ‘The same.’

Kirk nodded enthusiastically. ‘£200 buy in it is. Perfect. I’ll get some beers in too.’

‘We’ll find someone who will cover the fare for us. Two kids with no money. They are bound to take pity.’

I grimaced. ‘I’m not so confident. Do you really think it’s wise to risk our entire funds on an illegal game of a poker, a game which neither of us has played for cash before?’

Don looked back at me. ‘I would say it’s very unwise.’

The final session of poker, our first for real cash, started reasonably well. I won a couple of big hands early on, as did Don. I wasn’t used to drinking alcohol, but the lager tasted good, and it appeared to be adding focus to my play. I opened a second can, and then a third, and the effect was magnified.

The crucial hand occurred shortly before midnight. I had drunk four cans of beer, and remember being pleased with the symmetry, when I drew four Kings. Don had already folded his hand, and I proudly showed him my cards, confident that I was about to secure another pot.

I had learnt by now that when you have a strong hand in poker, you should raise. After putting in my customary raise of £1, I was delighted when Kirk re-raised me to £5.

Trying to appear cool, but secretly thinking already of how much of Kirk’s money I could win, I paused for a few seconds before picking up my chips. ‘I don’t think you have it, Kirk. I’m going to re-raise to £15.’

Kirk stared at me for a while, his brow furrowed.

‘Strong move, Lewis. The sensible thing would be to call you, see what you’ve got. But I’ve never played poker like that. I’m here to fight, Lewis. I re-raise to £40.’

There was a hush at the table. I looked at my cards again. Four Kings. A very strong hand indeed. Not many hands could beat that. I was confident I was winning. ‘I re-raise,’ I said. ‘£200, all in.’

‘Hold on,’ said Kirk’s brother. ‘This is getting serious.’

Kirk turned to his brother. ‘I think I have him.’

‘You are really going to call?’

It was then that Don intervened. ‘I’m in as well.’

‘I like Lewis’s hand. I’m putting my money in the pot as well. Look, another £200,’ Don said, throwing his chips into the middle of the table.

‘It’s not strictly legal,’ said Kirk’s brother. ‘But Kirk, if you want to let Don put his bet in, I’m willing to match it.’

‘Let’s do it,’ said Kirk, throwing his chips in confidently. Kirk’s brother followed, putting his entire stack of chips into the middle of the table. We now had over £800 in the pot. This was more money than my father earned in a week.

‘Time to turn your cards over,’ said Kirk’s brother.

I went first, proudly turning over my four Kings. ‘What do you think of that?’ I said. Don high fived me, as we waited for Kirk to turn his losing cards over.

‘Good hand,’ said Kirk. ‘Unfortunately, though, in this game, we play Aces high, which means my hand beats yours.’ As he said this, Kirk turned over four Aces, the winning hand. It was impossible. I had drawn four Kings, and lost.

The next day, with little sleep, terrible hangovers, and no money left, Don and I played the final round of the chess tournament. After the night we had just had, it was not surprising that we both lost, again. So ended my adventures with poker, for a few years at least.

Five years later, I returned to the British chess championships in Manchester, this time to play in the main championships. My friend Ron was also playing. One evening, Ron and I went for dinner. Shame faced, Ron admitted at the end of the meal that he didn’t have the cash to pay his bill.

‘Where did your money go?’ I asked Ron. ‘I thought you won a stack playing poker before we got here?’

‘I took a bad beat last night,’ replied Ron. ‘I was playing some guy called Kirk and his brother. My four Kings lost to Kirk’s four Aces. What are the chances of that?’

‘Probably higher than you think,’ I replied. ‘Tell Kirk I say hi, by the way.’

Andrew Laurie was born in the East End of London.  After graduating from Art College, he took a series of roles in film and television, specialising in art design and choreography.  Since 2007 he has worked extensively on film production across the United States and Europe.  He continues to maintain strong links with East London.

The Poker Player was published in paperback in  October 2015.

Number of items in cart: 0

Iconic One Theme | Powered by Wordpress